big night last night, & as jenny says, it was a schoolnight, too! it is fun to do couple nesting things...if by fun, i mean that it is the better phase of the torture of cleaning. i left work a little early with maggie, & we met up with jenny in chinatown to shop at pearl river mart. mostly to buy oragami paper to replace the sheets i ruined by spilling whiskey all over them. whisky? i can never remember. isn't it something like, whiskey is from ireland or japan, but nowhere else? seriously, it is confusing to me right now. ireland. i think it is irish, anyhow. with an e. after pearl river mart, we walked up the western quarters of the city to the container store. that place is pretty neat. filled with...containers. on the otherhand, i am notoriously difficult to wrangle when shopping. i revert to a child-like sullen sing-song chant. i do! but despite all that, we get shelves, & some knooks-for-knick-knacks, & even a new dnd miniature case. then we split ways & jenny hung up the shelves! & this morning i threw away all the rest of the stuff that was weeded out of our belongings. so pretty much, that is done. man, i don't like having my teeth pulled! 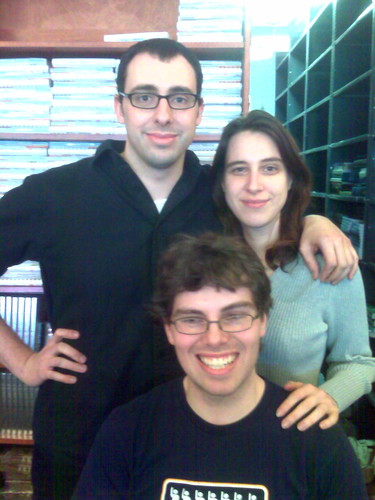 it was nice to run into val, the occasional superheroine & her werewolf-cowboy david.
(also,

kromelizard was there. that is true too, see the picture?)

sitting in bed drinking wine & hot chocolate & reading borrowed comics & plus, i've been thinking about the drake equation & fermi paradox all day. the way i see it, it more reinforces vinge's singularity, right? just proof that beyond that point, not only can you not postulate the future, but you can't even communicate with it. i mean, it is all just tongue-wagging & thought-experiments, but it seems that way to me.
Collapse