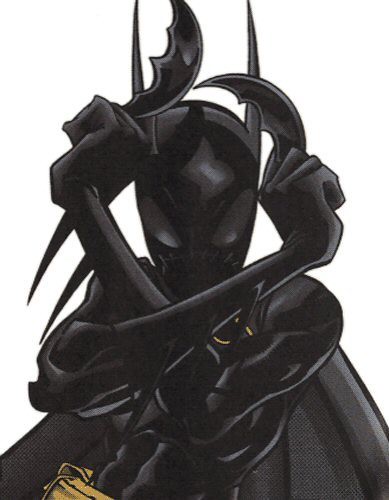 why is the cassandra cain batgirl so awesome. i mean, she is really, really awesome. easily the best bat in the cave, & definately one of my favorite of all comic book characters, ever. but, i, uh...i'm not sure i can articulate why. i can't quite put my finger on it. which is a good sign, i think. she's complex as a character. you can't easily reduce her. i like that, you know? & in a female comic book character, which is pretty rare (sadly). you know what though? maybe i'll just babble a little while about why she might be so cool. i don't know. just caught myself thinking about her.

first thing: she's got a good origin story. i mean, you can strip it down to essentials, you can kind of four panel it, like grant morrison did in all-star superman. little girl raised by assassin; never taught to speak; runs away after killing first target; idolizes batman. it has the over-the-top quality (you could say mythic) of a good back-story. sure, you can complicate it with trivia & continuity, but that isn't neccisarily bad (her relationship to shiva is alright). if you don't like it, you can always boil it back down again.

she has a good "power." it isn't really a power, the same way that batman's dedication, training, & gadgets are. she can read body language, she was trained from birth to be an assassin. more storytelling goodies; you can use that kind of short-hand. tells the history of the character without much exposition. she's possibly the greatest living martial artist based on these qualities. i got it.

she also has a distinctive look. the whole tim burton sewn up suit is something that is unique to her (well, & catwoman in the burton film, making it a nice little homage of sorts). she's got a utility belt that looks too big on her, like she's carrying the same stuff as batman despite being half his size. she looks like no one else. not only that, she has a distinctive storytelling style. i only saw it used a little bit, but i thought it was super-effective. since she didn't learn to talk as a child, she learned to read body-language, & i've seen it done so that every person on the page, from the background people in the street to the person in front of her, had a little "body-language" bubble. it was different & cool.

her relationships are golden. she does more than idolize batman; she practically worships him. there is a storyline in which some of the other batfamily realize she's never asked batman his "real name" because it never occured to her: to batgirl, his real name is batman. so cool. she also mentions how much she liked alien, because she identified with the aliens, all creeping, hiding in the rafters, scaring. fucking great. at the same time, she's a teenage girl; she gets embarassed, she tries to make friends. see? facets! also she is a girl. & asian. it speaks volumes that these are not the most important facets of her character. they aren't neglected, though, which also speaks volumes.

which i guess is all a way of saying that i like her because...she's a good character? you don't need too much science to figure the out. of course, she's recently had some downs: her series was cancelled (why?), she became "evil" cassandra cain, which was a stupid editorially mandated decision, they found out she was being given "evil drugs" to make her evil (whatever, at least she can be fixed, then), & now dan didio is saying she's going to be given her own "mini-series." i won't complain. i'll just hope that her mini-series has good talent & does well, so she can maybe get a full fledged series again. fingers crossed.

so it occurred to me the other day that i could pick, fairly easily, the two best comics of the year; one from each of the big two publishers, dc & marvel. there were other good comics, other great comics, even. some i'm leaving out because their consistant quality isn't limited to the year; fables, for instance, is always good. Others were good, surprisingly good, but not quite as good at these two: the sinestro corps war is an example of this. there are plenty of also-rans, but the following two comics are my pick of the year. they are also convienantly have trade editions out now, which means they are the kinds of thing you can keep on your shelf, or pick up now & dive right into. speaking of diving right in:

i just mentioned the four-panel doomed planet- desperate scientists- last hope- kindly couple origin kernel; that alone is such exellent, compact storytelling it really ought to be looked at for becoming a standard. the rest of the story is just loose enough to be free of continuity while at the same time giving a knowing superman wink to those who might care about a giant key being replaced with a key made from a neutron star. the stories are so off-the-wall that you can't help but be charmed by them, while at the same time being done with the respect that morrison clearly has for the character. beyond that, there is something deeply alluring about the science-fiction aspects of the superman story that are on display here: superman as the scientist, in particular. there is something about him hunched over a workbench that stays with me, like a pleasent haunting. so great.

in an interview, matt fraction said something along the lines of this comic being an exercise between himself & ed brubaker trying to "out awesome" each other. & you know what? brinksmanship for kick-assery? it works for you, guys. iron fist isn't a big name like some other capes. in a nut-shell, the immortal iron fist is a kung-fu master. he defeated a dragon, plunged his fists into the molten, still beating heart of the thing, & then joined a group called "heroes for hire." this story focuses on the the martial arts side of the equation, & it is fucking no-holds-barred. action! part of what really makes it are the little things, like-- in the tournament of immortal weapons (note: actual immortal weapons) of the seven cities of heaven (note: actual cities of heaven), when dog brother #1 fights the bride of nine spiders, he counters her "black milk of hell" attack with "razor dervish attack- ultimate." how sweet is that?
Collapse