the last apprentice: the curse of the bane by joseph delaney.

this is quite a fun little series. especially given that it isn't even really young adult, but a children's book. in that awkward tweens phase i guess. there sure is a lot of promising to burn fools, or bury witches, or what not. as i said about the first one, having a useful main character is always a pleasure. jenny is reading it now. i guess the best thing about it is the mood? & the sparse but effective use of illustrations.

the league of extraordinary gentlemen: the black dossier by alan moore & kevin o'neill.

hey man, lets get groovy! lets do battle with our fellow wizards; he'll try to infect my brain...& i'll let him. this is much less a "graphic novel" & much more a collection of written vignettes (& the occasional tijuana bible) with a comic book frame story. a lot of this book was obscure to me, which is always fun; i mean, i get your wooster & jeeves (thanks to david) & the shakespeare, & the kerouac, & so forth, but then there is plenty else. of course, culminating in...black face? the fucking goliwog? you are out of your flippin' mind, dude. awesome. the last bit of the book is all in 3-d (fun), & there are a few sweet innovations. like, when nyarlathotep shows up. if you close one eye, he is a well dressed egyptian man speaking in hieroglyphics. if you close the other, it is a tentacled mass (overlayed in the same space) speaking in english. i liked that quite a lot.

tome of horrors by white wolf.

old monster sourcebooks. mostly cute because the tome... is all "wizards said they won't make most of these monsters," on account of the fact that by now, they pretty much have. the ...collection is kind of useless, actually. they both dated, in a way that most early third edition products have. whatever. they were worth a page through. i'd get 'em if they were in a bargin bin, maybe. 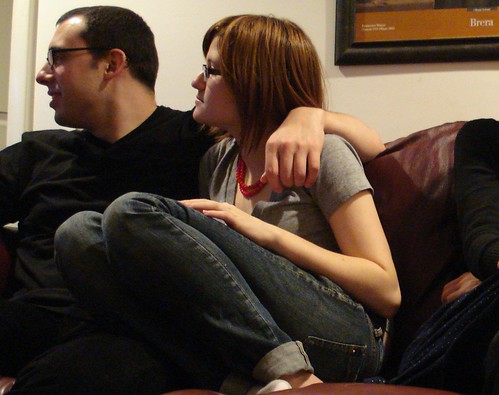 maggie & me watching the old teevee.

so here it is: i made a salad for dinner for us. it was pretty okay, i thought, but jenny didn't care for the dressing plus the soggy crutons. i like soggy. cold & moist. then we goofed around watching some television & drinking a bottle of wine. so then that phase was at an end. i'm not really in a reading mood? i have started reading perdito street station. the problem with that is that everyone who has read it has said it was "okay, but you'll really like it." which basically means it has too much hype to bear. i am trying to get at it, scissors scissors, without that hanging over. fuck off damocles! so i didn't dig into it when we flipped off the tube. instead i played a little game boy. which was okay, but now i'm done with it. i think i'll maybe get to it. mike was the one who brought up the garuda/naga/rakshasa/vanara combo. i have to say...i'm a little enchanted by it. so i am going to put those peepers on. whatever? i'm leaning here against jenny's knee fucking off on the computer to sort of enjoy the wine a bit longer, & sort of mostly listening to the mountain goats. it ain't half bad, but i do have a sort of twister cooked up in my guts. like that poor bastard in crime & punishment. that is what i'm up to with my evening. a weird ringing in my skull, sure, but i've been off kilter since sun's day. got hairy-spider there for a minute. now we're just ripples on that pond. or well. you're ripples. i'm the rocks under the water, i'm the shape that forms eddies.
Collapse