among the things i haven't been doing is reading, or at least novels; i've been sort of confining my consumption to the train, & didn't want to get bit by a good book, you know? times when i'm not knee deep in slugging away at the old nano-punching bag have been spent on the couch with my special lady friend. except for last night when i did 45 minutes of cardio over what i meant to because i was watching a mythbusters superhero special. exciting, right? oh, & i swashbuckle & warlock around town, here & there. anyhow, a run down, unless i'm forgetting something:

catwoman: when in rome by jeph loeb & tim sale.
i think i've figured out that jeph loeb, when he isn't writing retreads of origin stories or whatever? is trying to write a post-modern graphic novel. trying to explode the genre or whatever. oh, crap, hold on, i've got a really talkative customer here, let me jaw-flap with her about stupid joel osteen. feel dirty! okay. so i think jeph loebs weird dream sequences & muddled action, present in all of these "prestige" bat-books, is evidence that he is trying to do something, something. it isn't quite working, but i'm not going to ride the guy too hard for it. tim sale...makes catwoman really really thick, really really sicilian. it isn't a bad way to go; maybe catwoman ought to have thighs that go like woah. she's all kicking & jumping & whatever. there is a lot of cheesecake here, too, but couched in a pulpy feel that doesn't leave me thinking it was exploitative. the biggest weakness i think it the pervy little riddler. i didn't like his character here at all.

you got alan moore in my lovecraft! you got lovecraft in my alft'gn! ia ia! the dead are dreaming, deathless! so forth. you really just can't go wrong with a one-two punch like that, anybody will tell you that. it's just common sense. even with all the essays & annotation crammed in. heck, maybe i like the essays & annotation; i havn't made up my mind. the actual texts themselves are great, though; give alan moore some rope & he'll tie it into a gordian knot whose bumps & sworls remind you of things you wished your racial memory had forgotten. also: a two page spread of the devil fucking h.p. lovecraft's mom. it happened. because alan moore said it had to. he's a magician you know. he can do whatever he wants. so can i.

you know what? i'm officially done being surprised at the quality of content coming out of paizo; they are fucking stars, in my book. the pathfinder periodical isn't really in my neck of the woods, for the same reasons that modules & the like aren't; which is to say, it is basically a module-based publication. but it is really very well done. npcs with some flesh, stories with plots that are twisty-turvey but not too convoluted, monsters in appropriate contexts (i.e. not just sitting in a room waiting for the pcs to come kill them), & a pretty nice mythology. reading them was a pleasure, & if you've got an interest in a couple of new monsters a month, or pruning out bits to use in your game (like a haunted house, or suchlike) or in using it wholesale, i'd pick up a subcription. let me put it this way: i went ahead & subscribed to their production blog rss after reading these. oh, i also read the little "players guide" booklet for these, as well. lets not forget that! 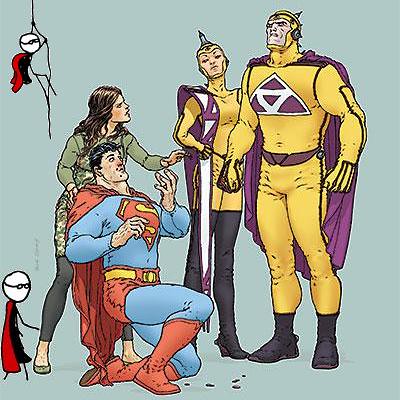 i just want to let it be known that if i had my way, i'd dress like a kryptonian, or cory doctorow.
Collapse