i finished reading this "deluxe module" on the heels of wizards of the coast's announcement that they're doing away with the great wheel cosmology. now, i can understand the benefits of getting away from the current planar layout- like, for instance, turning ideologies & alignments into abstracts. of course, i'm awfully fond of planescape's solution to the problem of just not making anyone care about your alignment. but really, as a dungeon master i immediately did away with the great wheel; flip side being, as a player, i've really enjoyed tromping up & down every plane from ysgard to carceri. this set of books is great for just that reason. first, if you havn't read a planescape book, you are missing out. the entire game line keeps to its own internal logic- the text is written in the anachronistic victorian guttersnipe slang popular in sigil, the adventures keep to the "rule of threes", the whole nine yards. & hellbound belongs to a gaming ethic of another day & age. the boxed set comes with a comic book (with art by tony diterlizzi, in other words, swoon), a booklet of images to show your players when they get to that part of the story, a booklet detailing the common perceptions of the blood war (the eternal war between demons & devils, or as they would say, tanar'ri & baatezu), another book of the truth behind the blood war for dm's eyes only (those two books called "the chant of the war" & "the dark of the war" respectively; not kidding about the slang). last but not least is the adventure module itself, which makes the players movers & shakers in the aforementioned war. how did i feel about the plot? it had its very strong points & its kind of weak points, but i think overall it sounds like a good time. i'd maybe switch or alter the macguffin, is all, but just to suit my tastes better. 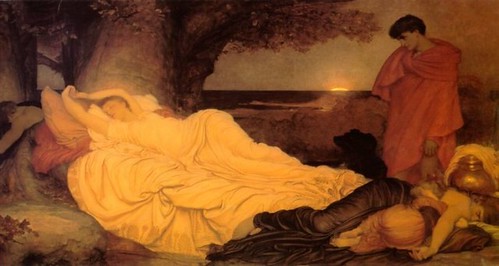 last night i went to see iphigenia 2.0 by charles mee at the signature theater.

onatopofthings has come into town for his birthday, so he got tickets for the event based on his mild obsession with captain admiral janeway. before we went over to the venue, we got some drinks & dinner at a sports bar called the irish rogue. i had pretty good bangers & mash; i don't know how jenny liked her hot wings, but the beer selection was pretty generic. the theater itself was pretty nice; i liked the "unfinished" set design look-- in fact the "chorus clown" was painting it as we sat down. the show itself was a zig-zag; at first, during agamemnon's (tom nelis) monologue, i thought the timeless nature of greek storytelling was going to be used to let the audience slot in their own degree of topical interpretation, but when menelaus (rocco sisto) had his big pep talk, that kind of fell away to the other end of the spectrum, as things got a bit preachy. menelaus was probably the weakest character, due to that slotting of politics. clytemnestra (kate mulgrew) was predictably over-acted, which at times worked, & at others, distracted-- when she was the kind of gross hamptons mom, it was great, but then at a few points it worked its way into histrionics, which i think kind of undercut the desperation that should have been there. achilles (seth numrich) was under-used in the script; the kind of doubting youngster? where did that come from? maybe somewhere, but it wasn't my favorite. plus, i really thought they were going to go with the "uh, marry her? but...i like dudes?" achilles, which would have been my choice. iphigenia (louisa krause) herself really only had one bit, her impassioned speech, which was fine, but as jenny pointed out, i'm pretty over feminine-bravery-as-martyrdom. the real stars of the show (as i said to one of them as they were walking next to us) were the background characters: the soldiers (j.d. goldblatt, willfowler, jimonn cole, jesse hoker) & the bridesmaids (emily kinney & chasten harmon). the soldiers displayed affability & menace alternatingly at the drop of a hat, as well as the strange frenzy of all-male groups; the girls went from giggles to horror just as easily, as well doing interesting things with the sexual attraction dynamic. oh, also, did i mention that the play was interspersed with dance numbers? that happened. afterwords we went our seperate ways, to store our strength for this evening.

Open to: All, detailed results viewable to: All. Participants: 20

what is the appropriate role of musicians in a society?

Open to: All, detailed results viewable to: All. Participants: 13

what type of person should fill the role of media darling?

the thing i think needs to be explained to young bloods out there in the world is that courtesy isn't a loss of personal power or privilege, but rather a statement, or even a gain. noblesse oblige is you, from a position of advantage, helping others out of social responsibility. it shows that you are such a big shot that you can take the time to stand there & hold the door for the next person; you're in no hurry, the world can't go on without you. you can stop & help whoever just dropped their stuff because heck; you're the effing man. too much of history has been the stressing of the noblesse, but in the age of revolutions, the oblige has risen to ascent. through basic courtesy, you display the features of a desirable team-mate; you transcend bully alpha into something better. you, by exercising your gentlemanly or gentlewomanly manner, display features of leadership. you open the door because you have the power to open the door. the dynamics of that power flow favor you. just something to remember, you savage chaotic evil bastards.

sunday i ran the first session of what was meant to be my promethean two-shot. now it looks like it might have to be more like a three- or four-shot. we had two new players in the group, both of whom worked out just swell. still unkinking the world of darkness rules, though. monday i stayed inside to spendthrift some time with my jenny, who is cute to make the sun bleed. tuesday was more monsterfest- that should be up on friday. apparently some of the guests canceled at the last moment, leading to scribbled interview questions. wednesday i pushed around some high school kids screaming "get the fuck away from my window!". about eight of them were curb stomping some other kid, & when they threw him up against our window i had to shoo them away with some ultraviolence. or really, just a couple of shoves. today is thursday.