i very much liked the first bit of this book; it is hard not to be interested in automata, after all. clockwork men rivaling anything sci-fi has going for it, only hundreds or thousands of years in the past. not to shabby a notion! this book examines more the illusion of automata, though; 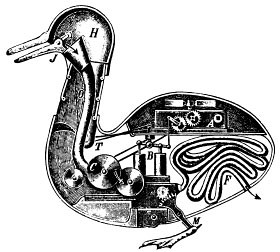 vaucanson's duck is hollow inside & just pops out pellets to mimic digestion, the turk has a tiny chessman inside of the box. towards the middle, though, she starts getting...well, what is the best way to put it? she starts drawing conclusions, lit crit conclusions, which i think jeopardizes things, especially when it transforms into historical crit, towards postulated psychological crit. the operator of the turk loses his sense of humanity...how? an interesting, but possibly masturbatory, turn. the bit for edison's quest for a talking doll is juxtaposed with a novel written about a fictional edison creating the perfect woman (which, yeah, promethean me gobbled up) was much better, at least from a thesis standpoint. the final section of the book focuses on the doll family of the sideshow circuit; apparently, the charm of them was the insistence that they were alive & not amazing machines. still, i thought the leap of logic was a bit tenuous, at least for the amount of time & detail spent on the topic. the penultimate section, though, deals with the evolution from automata to film, which worked like a fucking charm, especially given the link of méliès, which the invention of hugo cabret capitalized on. overall, i liked it, & the complaints i've listed here didn't end up a rock shore on which to break the book. give it a go if the subject interests you, or if you've got plenty of room in your belly for crit, which, to be fair, isn't overwhelming.
Collapse