today i faked my way through photoshop to make a character sheet for my next campaign. 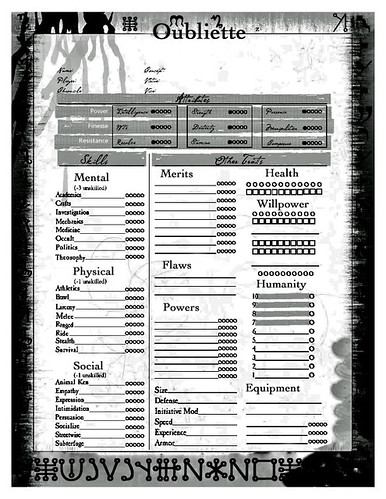 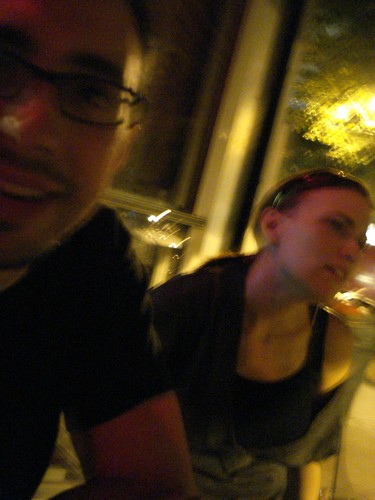 last night i met up with danielle to go to...karaoke? i guess i did at that. we bumped into each other at like, eight (8:oo) & took off for red hook. we sort of ninety degree'd (90°'d) off from bergen & walked there, but other than the clip, i was pretty impressed with the location. i havn't been to red hook since matt & i were hanging out a lot, & yeah; if you want to get on a gentrification wagon, that is a decent star to hitch your cart to. danielle introduced me to her co-worker & his wife, both of whom i really liked. eventually david met up with us, & just about then the bar started converting to karaoke mode. i had been lobbying for simon to come, & texting him like a psycho ex-girlfriend the more i drank, but it was not to be. i guess i was trying to psych myself into singing. which, the thing is? i can't sing. i'm comfortable with that! i'm comfortable about mostly singing songs i make up on the spot about caterpillars turning into scissors or whatever. but i'm also a sport, so i don't like going to a karaoke event & then spoiling it by not hitting the stage. maybe i was thinking simon could goad me into it, classic crooner her is, or whatever. anyhow, the selection of songs left much to be desired. i don't remember the eighties (80s) okay? my favorite song from then is "got to get tough...yo joe!", if you know what i mean. so when your selection is just top forty from twenty years ago, i get left in the lurch. i was going to sing "faith," but i really wanted to sing "freedom," & i realized i don't really know the words to "faith" & i'm pretty sure george michael's voice goes up & down a lot. so i left without saying goodbye to anyone & walked home.
Collapse