on saturday morning i woke up at four thirty in the morning with jenny "just to be nice & make her coffee." which is crytography for "so i can pack while you're in the shower," because i was on the flight out of jfk right behind hers. i did a little of archetypal association with the transit system ("okay, jfk is the lame king, &c") & before you know it my dweomer wrought true. i did get the full search at the security check point, but then, i always do. like they know. this whole thing was jenny's mother's idea; i got a call while i was getting drinks & aripas with

ranai about a month ago & we've been secret birthday cabal since. the flight was alright, & then i spent most of the day slinking around tempe in a black pointy hat & a black trench coat, king nogoodnik spy. not really though, because it is 115 degrees fahrenheit here; for real. but jenny's father & i ran errands for a while, & then i hung out with jenny's aunt & invincible uncle (he's fought a boar, a deer, & a goat with his hands) until it was time for the reveal. what do they call it in magician lingo? i guess the prestige. i dressed up in disguise & killed time outside the bar waiting for just the right moment. 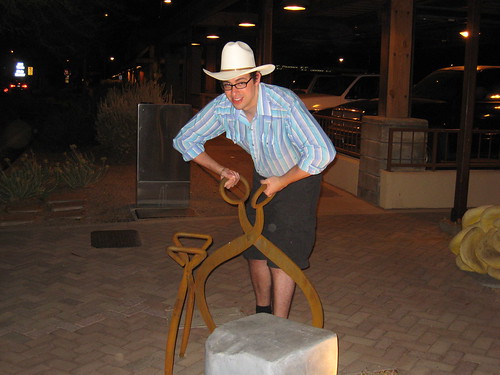 i sure do like this guy; as much as you can like a guy you've only read two books by (which is plenty). i used part of this book practically verbatim in my game: there was a letter he quoted that linked jews & lepers together in a plot to poison the water in france; i scribbled out "jews" & "lepers" & inserted more apropriate names but otherwise there is some real spooky inquisition shit there. i find a great deal of his conjecture to be kind of close to flights of fancy, but he always reigns it in at the last moment. & the bit with the monocrepidism? holy cow. the whole link of the lame hero/lame god/lost slipper/underworld is so totally sold to me; i'm actually still a little obsessed with it. that is some top notch action right there. a lot of the names get lost in the mix, as he's chasing after threads, but you can't slip "bensozia" past me, mister ginzburg!

she was awfully starstruck, shellshocked when i walked in, cowboy hat pulled low. we didn't have much time at the bar (just enough for her to akwardly play the tambourine for the house band & for me to have a beer & a shot) as we were on a three hour jet lag, but when we came back to her parent's, i was able to pull her teddy bear out of my bag. she's left the bear with me for company, but i'm thoughtful as well as hateful. we went off to the deep currents of the river of sleep & nepenthe.

the next morning we left for the white mountains, where we were going to camp. they are about five hours away from tempe, but a lot of that went pretty quickly. the skyline here is vast; flat until a mountain rises up & up. they are mostly extinct old volcanos as i understand it; either way, the mountains i'm used to are the tree covered appalachians, which these most certainly are not. occasonally the tops are crowned in trees, but mostly it is paint & cactci. we drove through a whole mess of them. eventually we reached the old route 666, & i slung the gps & we saavied our way to the site.
Collapse