i've been talking about television lately on account of i thought about starting a television warjournal, detailing the vast ammounts of it i watch. i've pretty much nixed that idea, since i'm too vain to really subdivide myself like that, but it has been on my mind. i would have called it "modernglobetheater" or something, since that is my old fall-back tool for explaining television to middlebrow intellectual snobs. you know, globe theater, shakespeare, fart jokes, &c. turn up your nose at popular media at your peril! anyhow, last night was wednesday, also known as "drink, drink, drink(athon)!" with

first on the platter was battlestar galactica. we'd been up to date on the scuttlebutt that starbuck was under the delusion that she should leave to avoid being typecast, & so nothing came as that much of a surprise or a blow. leoben-angel was pretty okay, though i've had leoben's back for a while now. also, going to church on galactica is weird! the priestess might just yell at you for not being nice enough to your dangerously abusive mother! also she might keep quoting the robots that stole your ovaries & tried to brainwash you. church! my prediction: starbuck will be back in the last episode of the season. i hope she's a voice in caprica sixes head! anyhow, i guess in the original series, starbuck maybe evolved into a seraph? or some shit. eat your heart out, wesley crusher!

heroes was phase two. hey, that is a good television show! i liked this episode a bunch, a whole bunch. the illusionist chick is a total bitch, huh? man, what a fucking bitch! good job making illusion powers like, the best. anyhow, also good job putting work in on making the cheerleaders mom a punchy character! with luck, her character rehabilitation won't have been a trick of the light, but even if it was just a mislead to make the eventual betrayal of horn-rimmed glasses guy seamless, it was a good one. it was the show for moms! the petrelli mom was a good reveal as well! malcom mcdowell was kind of yawn, though-- i do think, however, that making him the charles xavier could really save the day. anyhow, i hope mohinder gets killed. sorry dude! your character blows.

finally it is time for america's next top model! basically i just say "oh, she is my favorite!" every time one of the girls is on screen. i think maybe felicia is my real favorite? i don't know: i've also taken to just giving them all nicknames. felicia is "black tatiana," the pretentious blonde is either "sprite" or "pretense," & so forth. i really hate the fat girls; they're just taking up space. one will go early, & one will last till mid-season, but these are production decisions. tyra! come on. stop fucking with us. we get that you are all "let it hang out" these days, but lets not be tripping. this isn't a "be comfortable with your body" contest, it is a modelling contest. janice dickinson i miss you; we need you to slap some sense into this panel. i'll tell you right now, i bet the jays arn't taking the fat-attack sitting down. maybe they are, maybe they are being nice to tyra & pretending. anyhow, who was even kicked off this week? oh alchohol! all i know is it wasn't mail-order bride.

lost. hey, is anybody still watching this show sober? if so, you are a sucker-fool. what the fuck is this shit? fuck lost. seriously, fuck this show. i now officially don't fucking care about your television show. you can't even make a charismatic character like sayid into anything interesting! you fucking fuckers. what! infections? enemy agents? chess computers? i don't even know what the fuck i was watching, but i'll tell you what it wasn't-- good television. remember first season when people were all like "no, it is a brilliant allusion to purgatory! or they are on a generation ship headed to another star-- a space ark! or wait, it is..." & there were interesting things to talk about? yeah, now what, bitches? now what. lets talk about sexy electromagnetic interferance! lets! you fucking fuck. the only reveal i care about anymore is when they will reveal that the "others" are the descendants of the wrecked survivors of the s.s. minnow. with the professor's brains & ginger's looks & maryanne's spitfire, no one can stop them!

after all that, we tried to watch australia's next top model but man, fuck that. also i was trying to make everyone leave so i could have sex with my girlfriend. sex she wasn't sure we had when we woke up this morning! man, fuck this morning, crawling into work late. but here i am!

comic books! captain america is "dead." okay. whatever. he doesn't even care about nascar! or jerry springer! he's no "captain" of my america. so what the fuck, marvel comics. what the fuck. i fucking hate you. the only thing you could do to fix 198 & civil war is to have professor x & mag-fucking-neto show up together saying "see, we fucking told you that it was going to go down like this. first the mutants, then the jews, then the catholics. the mutants fucking dissapeared! you didn't even care! then they fucking put tags on you like animals! iron man even looks like a sentinal, &c!" though i guess having hulk come back from being space-conan & kick the crap out of everyone would help, too. but seriously civil war, what the fuck. you sucked. whereas? 52 is fucking great. how great is sobek! i totally called him being famine, along with every other geek in the world. anyhow, i hope he isn't dead- he has chops to be a good marvel villain. also, i've said for a long time that i think isis is amazing grace, from apokalips, & i stand by it still. speaking of marvels! how great is jeff smith? what the fuck are those super-rat-giants?! great googly moogly! did anything else happen in comic books? oh, the avengers re-re-boot. tony stark, you are great, with your tacky-ass helicarrier. bendis, the fuck is with all the thought bubbles? did you take a dare or something? i don't hate them, just, what? anyhow, you've put together a weird team. i'm alllllll for ms. marvel (hey, another marvel!) being a top gun. i admit it, it is the boots! but i'm ready for her revamp to make her a-list. wasp is good too; there is plenty of potential there, same with the sentinal. ares? what the fucking...ares? okay? black widow i'm also a fan of; i say make her a time-icon for the cold war, the same way captain america is wwii & the punisher is vietnam.

more comic books! i just put that paragraph break in for readability. also, because there was a brief pause in my writing of this entry, as i got the other comics i want to talk about from the counter. how about that! oh, also, remind me to tell you about how ninjas hate the fourth wall. okay, here goes. the thunderbolts! i think they need to get their corn seriously creamed by citizen v. citizen v! how great is that guy! is baron zemo the swordsman now? whatever, who cares. citizen v! next up, jla. brad meltzer need to figure comic books out. like, between this run & identity crisis, there is something he just doesn't get. anyhow, good move putting red tornado back in bolts, but still, seriously bad move with the smart grundy. uh, the authority. another bucket of snooze! i agree that the authority only really matter in a world without other superheroes. that said, for a long time i have wanted the wildstorm universe to only include the authority, HALO, & tao. oh, hey, did you read marvel zombies versus army of darkness? i actually liked it pretty well! i could imagine easily in the head over-the-top delivery by bruce campbell, which is all i really wanted from it, so you get a checkmark in your column! lastly, dear gail simone: GOOD JOB OR SUBMISSION. okay, not really lastly. one more. outsiders. i liked the story! somehow judd winick = heckuva job! mission accomplished! i dig this rag. but! who the fuck is this artist? barberi? YOU STINK! seriously, i don't mind some cheesecake (see above re: gail simone) but you have got to be fucking kidding me! thunder's tits are beyond comically exagerated, & grace's hour-glass ratio would stop a grain of sand. i mean, if you are going to draw like you are a cross between a "homies" ad (you know, those toys you get for a quarter), the least you could do is...quit drawing. i would open up the issue to find more things to insult about your art, but it is actually bad enough for me to not want to look at it ever again. please drop dead.

here is the story about ninjas. the reason that they dress in a tight black outfit in pop culture, particularly. so the deal is, in japanese kabuki theater, stage-hands dress in tight black outfits for the same reasons that modern stage-hands do. you know, they're a little white lie of fiction, a suspension of disbelief, right? except in kabuki theater, every so often, a stage-hand will draw out a dagger & kill a character! because, right, he was just assassinated by an invisible ninja, or whatever. how fucking po-mo & great is that? totally fucking sweet.

we skipped out of work early to try to scam on some museums-- it turns out that we were too late! 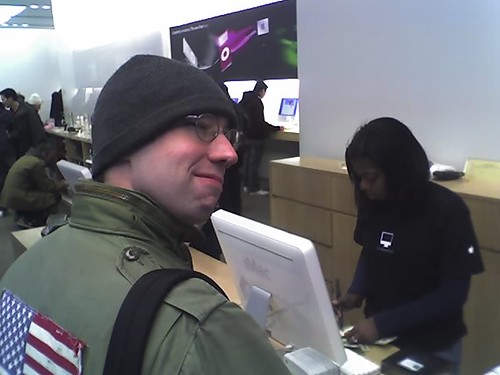 first we stopped at the apple store to get david a new ipod. 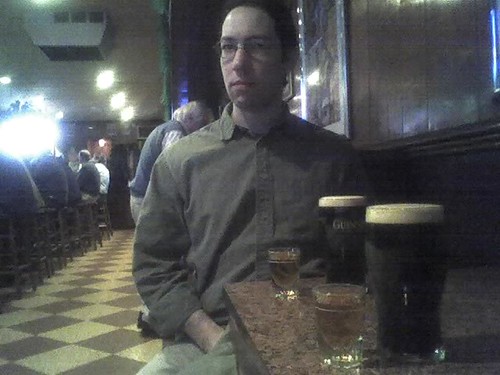 then we ended up at a bar, after the met & the science museum wouldn't let us in.
(we mostly talked about illyana rasputin coming back! she's our kitty pride.)
Collapse